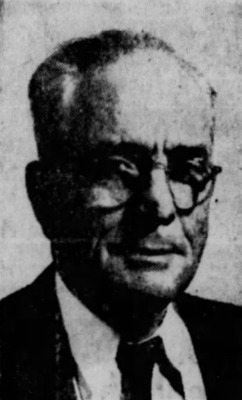 Joseph Francis Willard Morrison (April 14, 1890 - August 1, 1971) was born in Anderson, Indiana to Septimus Prasse Morrison and Mary Elizabeth Hobson. After attending the University of Kentucky College of Law, Morrison moved to Stuttgart, Arkansas where he began practice. Morrison attended an officers training camp before serving in the US Army during World War I. Morrison returned to Stuttgart after his discharge and continued his legal practice. Additionally, Morrison served as city attorney for Stuttgart. In 1955, Morrison was appointed a chancery judge in the Fourth Judicial District. He was re-elected into the position after the end of his term and was able to retain it until his death. Morrison was married three times. His wives were Oakley Thomas (m. 1917-1936 (one child, Jane Oakley Morrison Wood)), Maud Avis Walters (m. 1939-1965), and Anna Bell Biggs Vickers (m. ?-1971). Morrison published a book, Pure Water from Old Wells, in 1963.

*Mr. Morrison is not listed in the 1913 edition of The Kentuckian.