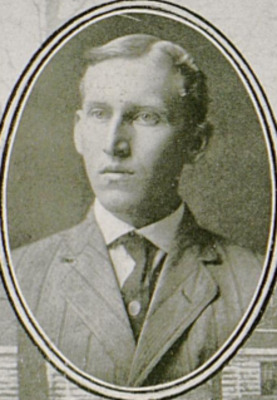 "Talk not of love, it gives me pain." I hail from the good county of Muhlenberg, and even in my balmiest Freshman days I saw that Arts and Science was not sufficient for a fellow of manly qualities, and matriculated in Law. I continued for two years ranking among the first in my studies and then decided to take a holiday. Since my return my chief occupations have been playing "'500," smoking strong tobacco, and writing to my girl. Lately, I have been busily engaged reading her old letters as a substitute. My college career may be summed up in the words, "Veni, vidi, vinci"--all but one woman!

Stephen Lemont Pannell (July 16, 1889 - 1931) was born in Greenville, Kentucky to Thomas Benjamin Pannell and Louise MacFletcher Lovell. Pannell received his LL.B. from the University of Kentucky in 1912--he then received a Bachelor of Arts in Latin from the University in 1914. Pannell worked as a Special Agent for the Bureau of Investigation of the United States Department of Justice in Cleveland, Ohio. He then moved to California and was admitted to the California bar in 1929. He practiced law in Orange County, California until his death in 1931. Pannell married Eula Langley in 1917.