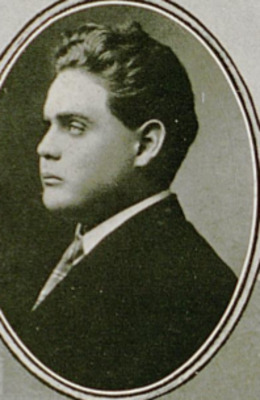 "I am nothing if not critical." "Perk" appeared on the scene in 1910. He had some previous knowledge of the law which he got in the courts "down home." It has taken him some little time, and no little trouble to decide whether to stay here two years or three to complete his course. In fact, at one time, he contemplated doing it in one year. He is always ready for an argument, no matter on which side; and is a triumphant winner, but a good loser. He has many original ideas which show deep thought, and' his grasp of things legal is unusually good.

Walton Perkins (September 18, 1891 - January 16, 1950) was born in Whitley County, Kentucky to King David Perkins and Malinda Boyd. Perkins was blind and studied at the Kentucky Institution for the Education of the Blind. After graduating from the University of Kentucky College of Law, Perkins returned to Whitley County. He worked as a lawyer and was also elected as a county police judge.