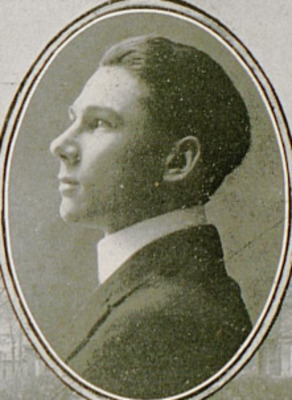 "His words like so many nimble and airy servitors, Trip about him at command." Willard hails from Eddyville in the "Penny-rile" country. Reared as he was upon the bank of the Cumberland, it is only natural that his hobby should be motor boats and truly it is! When he entered college the free out-of-door life of the Civil Engineer seemed to be his calling, but after a year and a half his latent legal ability would out, and he crossed over to the followers of the "Judge." Between writing Arbor Day orations, reading Motor Boating, playing chess, "Briefing Cases," and penning voluble letters home (?), Utley is usually pretty well occupied.

Newton Willard Utley, Jr. (May 5, 1891 - March 17,1988) was born in Kobe, Japan to Newton Willard Utley, Sr. and Mary Stacker Childers. His parents were missionaries and his father taught English in Japan. The Utley family eventually returned to Eddyville, Kentucky where Utley, Sr. began practicing law. Utley, Jr. graduated from the University of Kentucky College of Law in 1912. He practiced law with his father in Eddyville. During World War I, Utley, Jr. was an Intelligence Officer in the Army. He briefly worked for the Federal Bureau of Investigation before returning to legal practice. Utley, Jr. moved to West Palm Beach, Florida after the war and lived there until his death. Utley, Jr. had three wives: Hazel Cordill, Eva Mae Matson, and Miriam Cleola James.