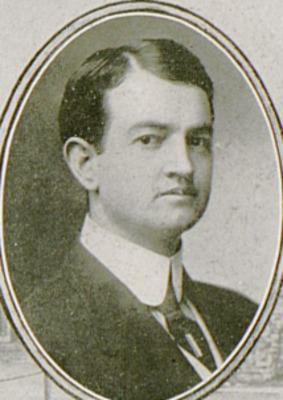 LL.B.; Union Literary Society; Secretary of Henry Clay Law Society; Secretary of Mountain Club: Member of Cadet Band; Varsity Baseball Team; K. O. T. M.; Secretary of Kentucky Law Journal. "A red-cross knight forever kneel'd To a lady in his shield." "Eddie" emerged from the cane brakes along Green River in Casey County, but to satisfy a laudable ambition soon went out to conquer other worlds. He wandered into Lexington one wintry morning from Union College, where it seems he left a very dear friend. He is modesty personified, yet his fetching smile has won the heart of more than one fair maiden all in vain! His greatest ambition is to become a learned lawyer, but the chances are against him as nature moulded him for a preacher, and fate is fate!

Edmund Perry Wesley (February 21, 1890 - January 8, 1960) was born in Casey County, Kentucky to George Marion Wesley and Lucy Sweeney. After graduating from the University of Kentucky College of Law in 1912, Wesley moved to Oklahoma where he began teaching at a high school. Wesley eventually returned to Kentucky and worked as a manager for an insurance company in Louisville. Wesley returned to Lexington by 1940 where he continued to work as an insurance agent before transitioning to work as an adjudicator for the Veterans Administration. Wesley married Ellen Dorcas Plog.