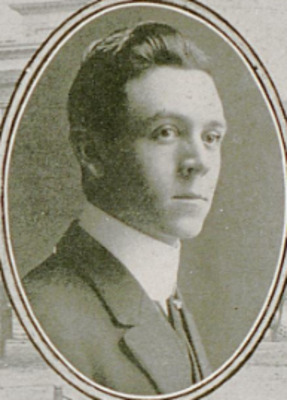 "I am struck dumb by the depth of my own thought And stunned by the soundness of my logic." When "Bill" had become thoroughly imbued with the spirit of freedom lurking in his native hills, he wandered forth to spread the strength of his convictions elsewhere. He can wax eloquent over any phase of human activity football, politics, faculty, or buttermilk are pie for him, and alas! of late his lips have learned the amorous phrases of the love sick. Always an ardent supporter of our cross-town sister, Bill has lost his affections since an embryo evangelist barely missed his cranium with a nail tipped club. Bill is decidedly a literary genius, with a pronounced taste for thirteenth century French prose.

William Henry Townsend (May 31, 1890 - July 25, 1964) was born in Anderson County, Kentucky to Oliver Lambert Townsend and Susan Mary Brown. Townsend remained in Lexington after graduating from the College of Law. Townsend worked as a lawyer in Lexington and served as Corporation Counsel for the city. Townsend was a noted historian and collector of materials and artifacts relating/belonging to Abraham Lincoln. Townsend wrote several books on Lincoln, including Lincoln and the Bluegrass : slavery and civil war in Kentucky, Lincoln and his wife's home town, and Lincoln the litigant. Townsend was the founder and first president of the Kentucky Civil War Round Table. Townsend married Ona Genevieve Johnson in 1915.