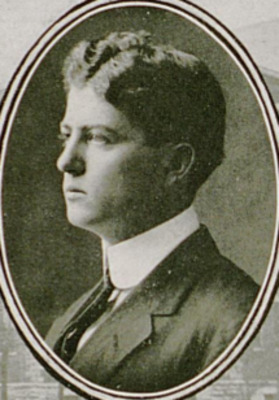 "My head is no loafing place for hair (?) But a place for 'Ideas.' " Although my father encouraged me to attempt mining engineering, I soon launched into the study of the mysteries of Law and found that after my wanderings I had arrived at home. But when I felt that I had gained a sufficient knowledge of the principles of Law I began to acquire some of the practical experiences of College Life, among them captivating many of the fairer sex. On account of my extensive vocabulary my fellows made me the recorder of college events through the "Idea." Work never bothers me. I usually take chances and always make good!

William Abner Stanfill (January 16, 1892 - June 12, 1971) was born in Barbourville, Kentucky to Joshua Frances Stanfill and Lura Davis Faulkner. Stanfill first attended Union College in Barbourville. He returned to Barbourville to practice law after graduating from the College of Law. Stanfill moved to Hazard in 1916 and practiced there in the firm Faulkner, Stanfill, and Faulkner until 1925. He then practiced in the firm Craft and Stanfill until 1950. Between November 1945-November 1946, Stanfill served as one of Kentucky's Senators in the United States Senate. Stanfill was appointed to this position by Governor Simeon Willis to fill the seat after the resignation of Happy Chandler. Stanfill returned to Kentucky and practiced law in Lexington until his death in 1971. Stanfill married May Begley in 1915.