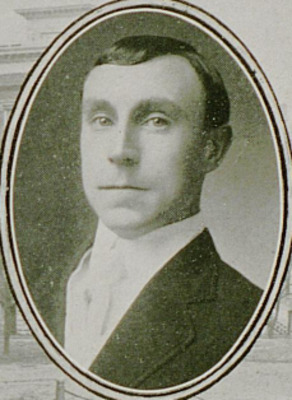 "My recreation is to work." Jobie came to this University after he had led the class of '10 in their Senior year at Eastern Kentucky State Normal. Here, too, he met with exceptional popularity and established a record as a thorough student. In the fall of '11 he journeyed to Valparaiso University, but having heard the sad, sweet strains of "My Old Kentucky Home" once too often, he decided to return and cast his lot in Kentucky State. Present conditions indicate that his wanderings are over, and that he is looking forward to the not far distant and happy day when he can return to his beloved mountains and pluck a "wild rose."

Joseph "Jobie" Birchel Campbell (August 7, 1884 - August 17, 1966) was born in Knox County, Kentucky to John Anderson Campbell and America Frances Thompson. Campbell first attended the Kentucky State Normal School (now Eastern Kentucky University) and graduated from that institution in 1910. He received his LL.B. from the University of Kentucky in 1912 and an A.B. from the University the next year. Campbell returned to Knox County after his educational pursuits and practiced law with J. D. Tuggle. Campbell began his own solo practice in Barbourville in 1919. Campbell was involved in several local industries--he was president of a local coal company, stockholder in many local banks, and co-owned a fire insurance company. Campbell married Sue Mae Green in 1916--the couple had two children.