February 6: Public Meeting of the Colored Citizens of Detroit 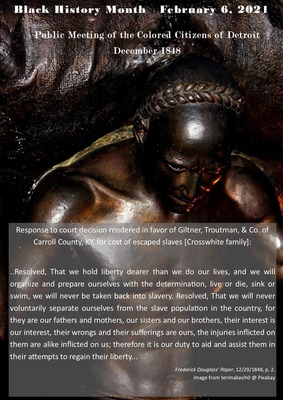 In response to the federal court decision in the fugitive slave case brought forward by a Kentucky slave owner in reference to the The Crosswhite Affair, a mass meeting was called in December 1848 by African Americans in Detroit to discuss their relations to slavery in America. The meeting was held at City Hall. A report of the meeting was printed as an article titled "Public meeting of the Colored citizens of Detroit," in Frederick Douglass' Paper, 12/29/1848, p. 2.