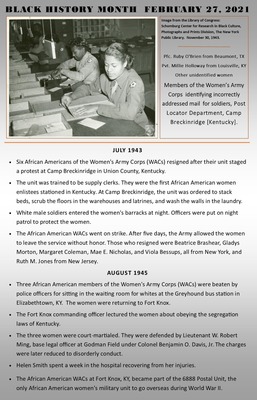 In 1943, six African American members of the Women's Army Corps (WACs) resigned from the Army after their unit at Camp Breckinridge, KY, staged a protest over their job assignments. The women were among the first African American women enlistees stationed in Kentucky. They were a division of the Women's Army Auxiliary Corps (WAACs) that had been established at Fort Des Moines, Iowa in 1942. In 1943, the WAACs were being transitioned over to the WACs.