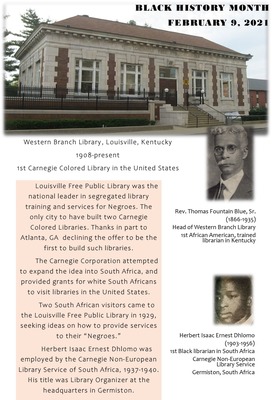 The first Carnegie Colored Library buildings were built in Louisville, KY: Western Branch in 1908 and Eastern Branch in 1914. The addition of the branches enhanced the recognition of the Louisville Free Public Library as the national leader in segregated library training and services for African Americans. There was an attempt on the part of the Carnegie Corporation to transfer the ideology to South Africa. The first Black librarian in South Africa was Herbert Isaac Ernest Dhlomo (1903-1956), he was employed by the Carnegie Non-European Library Service, 1937-1940.