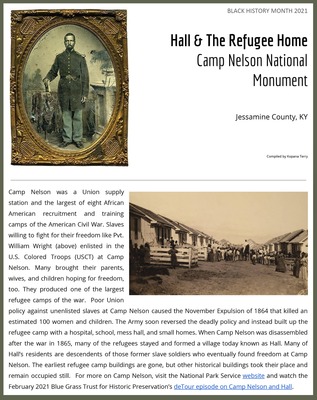 The Camp Nelson refugee camp housed the families of hundreds of African American soldiers. The large number of refugees created a problem that the army was not prepared to handle, and camp commander Speed S. Fry ordered the refugees to be forcibly expelled. More than one hundred of the refugees died from exposure. Due to these deaths, the order was countermanded and housing was built for refugee families in a location adjacent to the soldiers’ camp. After the war the refugee camp became the community of Ariel and was eventually renamed Hall.