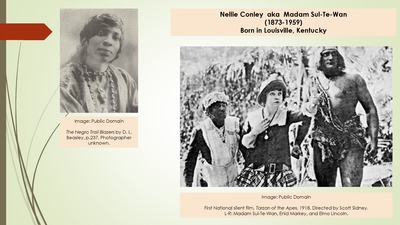 Nellie Conley went by the name Madame Sul-Te-Wan. She was born in Louisville, Kentucky. Madam Sul-Te-Wan was an actress with a career that spanned more than 70 years. She played a lot of mammy roles: maids, cooks, witch women. These were the types of roles available to African American actresses. In the 1954 movie Carmen Jones, she played the role of Hagar, the grandmother of the character Carmen Jones [Dorothy Dandridge]. It was an acting role; Madame Sul-Te-Wan is NOT the real life grandmother of Dorothy Dandridge! Madam Sul-Te-Wan died in Los Angeles, CA and is buried in the Valhalla Memorial Park.